For The Love of Blue Tongues

The Tiliqua Complex
Blue-tongued skinks comprise the Australasian genus Tiliqua, which contains some of the largest members of the skink family (Scincidae). They are commonly called blue-tongued lizards or simply blue-tongues in Australia. As suggested by these common names, a prominent characteristic of the genus is a large blue tongue that can be bared as a bluff-warning to potential enemies. 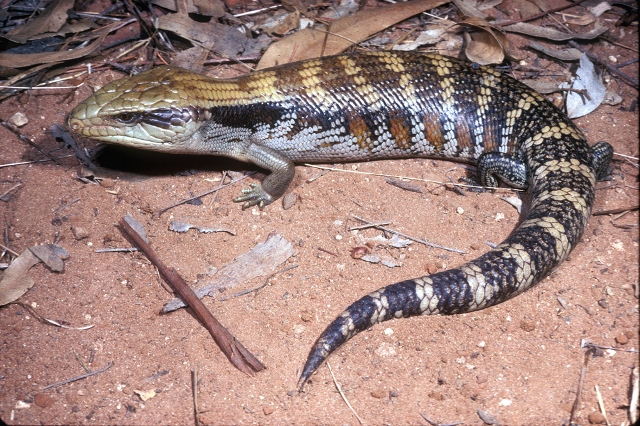 
Scientific Name: Tiliqua scincoides scincoides
The Eastern Blue Tongue Skink is a subspecies of large skink which is common throughout eastern Australia, often found in bushland and suburban gardens where conditions are suitable. The lizard is known as blue-tongue because its tongue can range from bright to dark blue, and it has a habit of displaying it prominently and hissing loudly when disturbed.


Reproduction:
Eastern Blue Tongue Skinks give birth to live young, between six to a record 20 per litter. The young consume the egg sac immediately after birth and the juvenile form resembles the adult. Mating occurs during the spring months with the babies being born in late summer.  In captivity mating can occur during July, August with babies to be expected November, December. In general after mating babies can be expect 120 days after. 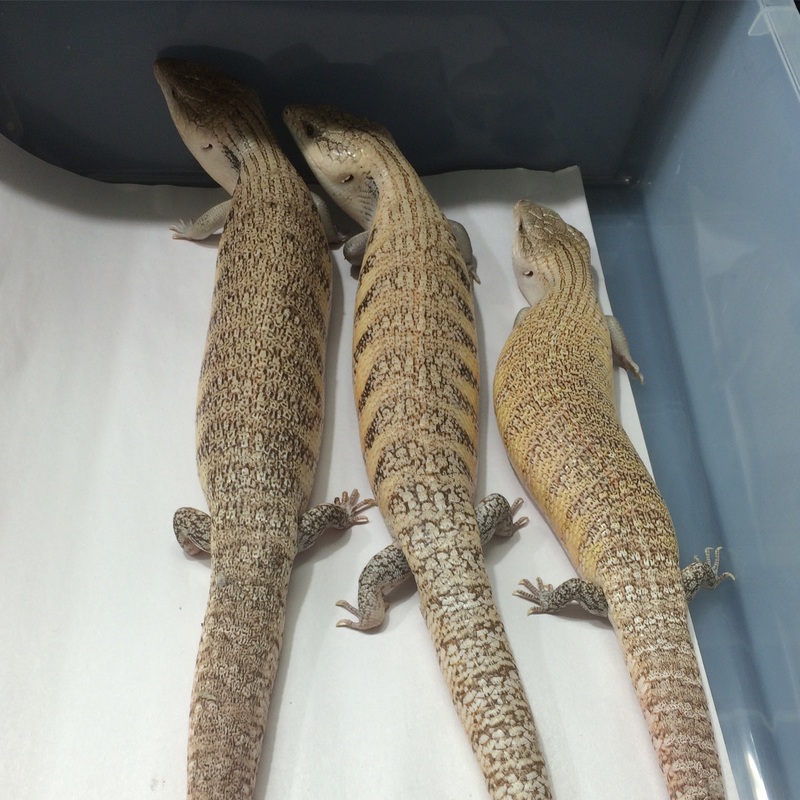 
Scientific Name: Tiliqua scincoides intermedia
Are the largest and heaviest of the Tiliqua family. They are native to Australia and found almost exclusively in the northern region. They generally live around 20 years and are commonly kept as pets.


The northern blue-tongued skink  is a subspecies of the eastern blue tongue skink (T. s. scincoides). Similar to other blue-tongued lizards, the northern blue-tongued skink has very distinctive patterning. Northerns tend to be a bright orange to soft peachy orange or even a yellowish colour with darker stripes along their sides and backs, with a lighter, creamier colour on their bellies. As their name would suggest, they also have bright blue tongues often used to warn off or startle predators. Their legs are short and small compared to the length and width of their bodies. They can grow to approximately 60cm total length.


Reproduction:
Northern Blue Tongue Skinks give birth to live young, between 15- 20 per litter. The young consume the egg sac immediately after birth and the juvenile form resembles the adult. Mating occurs during the spring months with the babies being born in late summer.  In captivity mating can occur during July, August with babies to be expected November, December. In general after mating babies can be expect 120 days after. 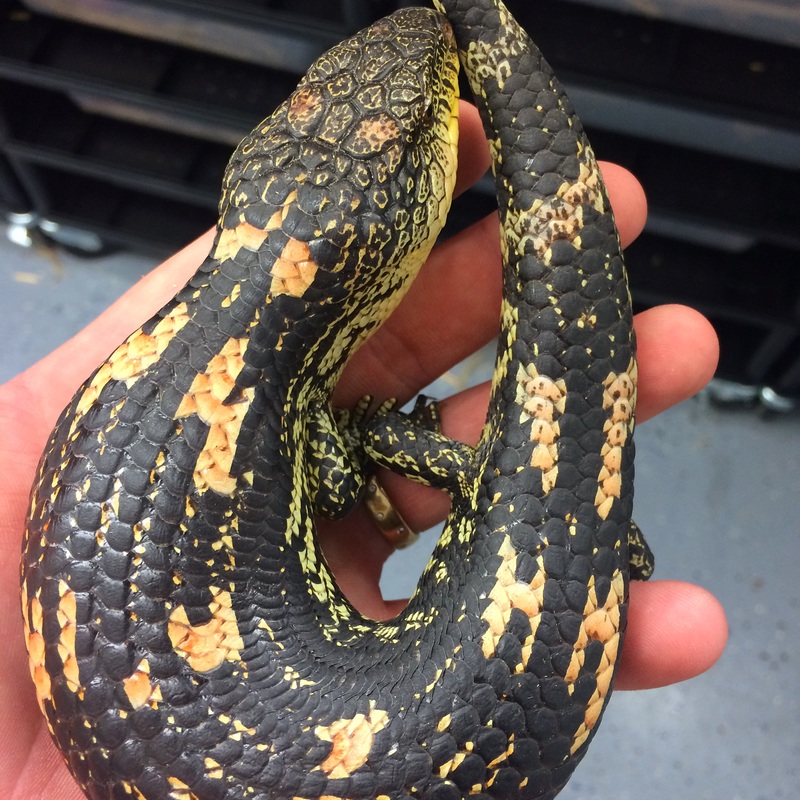 
Scientific Name: Tiliqua nigrolutea
The blotched bluetongue grows to between 40-60cm in total length, about one third of which is tail. Like its close relative, the eastern bluetongue, the broad, fleshy tongue is vivid blue in colour and is used as a warning display to would-be predators. The body is mostly black with varying amounts of light brown or grey blotches or bands. In some specimens these lighter markings may be pale yellow or even orange. The head is usually dark grey and is wide and triangular in shape.

The blotched bluetongue is only found in the south-east corner of Australia, from the eastern extremity of South Australia to Victoria, ACT and highland areas of New South Wales as well as Tasmania. They are most common in the higher parts of the Great Dividing Range. They inhabit a wide variety of highland habitats including heathland, woodland, grassland and alpine meadows. They like to bask on roads that have been warmed by the sun, a habit which, unfortunately, causes many to be killed by passing cars.


Reproduction:
The blotched bluetongue produces live young. Between three and 12 are produced by the female in late summer. They are relatively large at birth (around 150mm in length) and must immediately start feeding and laying down fat reserves to get them through the coming winter, which, in alpine areas, may last four or five months. 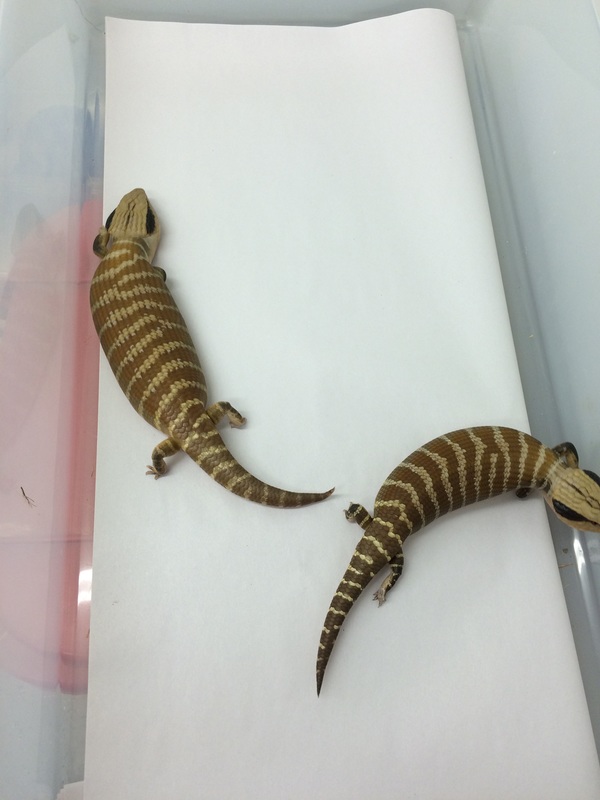 
Scientific Name: Tiliqua multifasciata
This species of skink occurs in the northern arid half of Australia, living terrestrially amongst sand dunes, plains and inland hills around vegetation of open shrubland, open woodland and hummock grassland.

It also takes shelter in animal burrows, leaf litter and under stones. It has quite a robust body and large triangular shaped head, with a relatively short tail. Its colour is predominately brownish grey and has 11 to 13  narrow orange bands  going across the body, and the tail has wider brown bands across it. 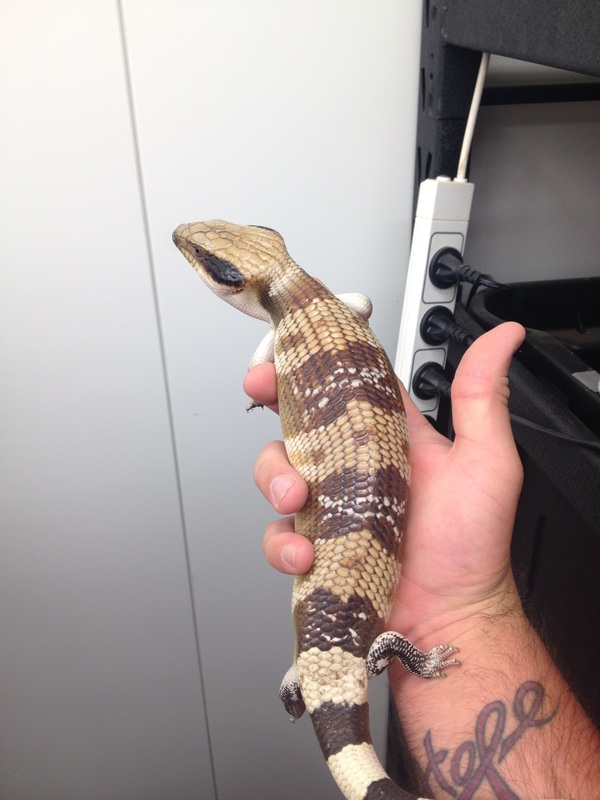 
Scientific Name: Tiliqua occipitalis
The western blue-tongued lizard grows to around 45 cm (18 in) in length. It has a brown, banded pattern across the body and tail; the underside of the body is usually pale. It has distinctive black markings to the rear of each eye. The body is wide and large in comparison to the size of the legs. As its name suggests, it has a blue tongue, which contrasts with the pink interior of its mouth. When threatened, it may open its mouth and stick out its tongue in a threat display. If the initial display is unsuccessful, and the predator or threat does not retreat, it may hiss and flatten out its body in an attempt to make itself look bigger.

The western blue-tongued lizard is found chiefly in Western Australia. It is restricted to the far south in the Northern Territory, and divided into an eastern and western population in South Australia. It is listed as "Near Threatened" in Victoria, where it is restricted to the north, and "Threatened" in New South Wales, where it exists as a population to the southwest and in a pocket in the centre of the state. Threats to the species include predation by introduced species such as the red fox and domestic cat, clearance of habitat for agriculture, and destruction of the rabbit warrens used for shelter.

Diet:
It is diurnal, hunting for insects, spiders, and snails, and foraging for plants (particularly berries) and carrion. It is not an agile lizard, so its prey tends to be slow-moving. It has powerful jaws which allow it break up snail shells and the exoskeletons of beetles.


Reproduction:
They give birth to approximately five live young. The young consume the placental membrane immediately after birth, and are precocious and disperse after a few days. They have bands of yellow and brown on their bodies and tails.
.